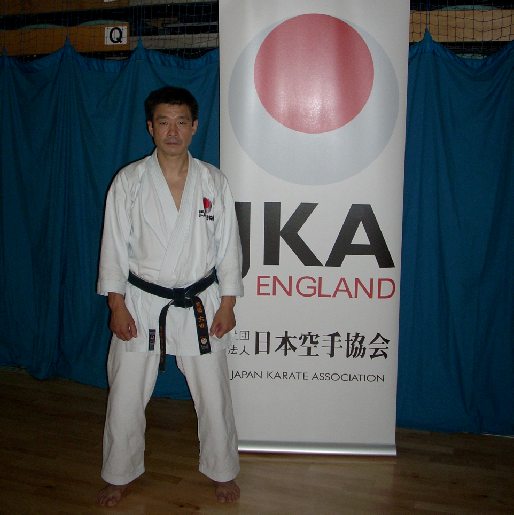 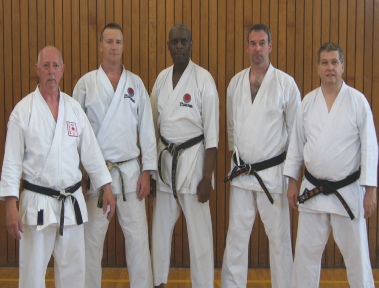 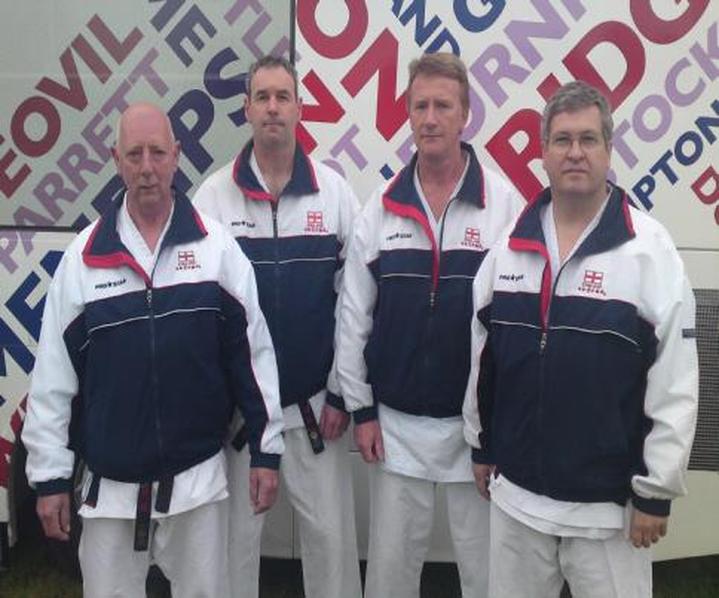 Mark started karate in 1979 at Bath SKC under several very influential instructors; a year later he then also joined his current club Norton Radstock JKA (then Midsomer SKC) as a green belt, training four or five times a week at both dojo’s until he achieved his 1st kyu under the then chief instructors Sensei Frank Teall (MSN) and Sensei Brian Middleton (Bath).

After achieving his first kyu, Mark took a short break before resuming training  at the Midsomer Norton SKC only, where he was the first person within the club to achieve the coveted Black belt (1983), which today means that he is the longest serving dan grade from the original club.

As a fighter, he is rather unique, in that he has no particular speciality; he is equally at home using hands or feet and quite often surprises his opponents with dynamic combinations of some of the more unusual hand or foot techniques.

Mark was very active in all local and national competitions in both kumite and kata achieving good placements in both, his personal favourite result was getting as far as the final round of the eliminations of the kurmite at the 1985 KUGB Nationals. He formally retired from competition in 1997, but still misses the buzz to this day.

Mark was graded Shodan by Sensei Sherry, Nidan and Sandan by the late Sensei Enoeda and Yondan by Sensei Ueki.

Marks training philosophy is “try your best a everything you do; success will not come to you, you must go and find it” and remember when all else is said and done the most important element in any attacking move is “To Strike” if you can not – do not try.

Rob started karate in 1974 at Romford YMCA, Essex. His first instructor was Peter Knight, then a 4th kyu purple belt. The club was affiliated to both the KUGB and Sensei Ray Fuller’s Thames Clubs. It was Sensei Fuller who graded Rob up to 5th kyu.

In 1976 he went to the University of Surrey and trained at the University Club, also a member of the KUGB, under Sensei Phil Reed. Rob was the club secretary for three of the five years he trained there and gained his black belt 1st Dan in 1979 under Sensei Enoeda, before that he was graded up to 1st kyu by Sensei Tomita. During this time he captained the University team in many national, regional and all-style competitions. He was also able to train throughout the country with many famous Japanese and English instructors, from many different Shotokan associations.

In 1981 he moved to Plymouth and trained with one of the oldest established clubs in the country, Plymouth SKC under Sensei Les Clarke. At that time Les had a very large club with many Dan grades and training was always hard, technically correct but always conducted with the best of etiquette. The visiting instructor was Sensei Tomita, until 1983 when Sensei Ohta arrived from Japan.

In 1991 Rob moved to Paulton and joined what is now Norton Radstock JKA, where he assists in running the club. After an interval of 19 years he started grading again , receiving both his Nidan and Sandan from Sensei Enoeda. He was awarded his Yondan in 2007 by Sensei Tanaka. He re-established links with Sensei Ohta, when the club started regular gradings at Glastonbury in the mid 1990's. He regularly trains with Sensei Ohta on national and local courses, as well as visiting JKA sensei from Japan and Europe.

Geoff started karate at Norton Radstock JKA  (then Midsomer Norton SKC) in 1986, along with his son. Over the years he has trained on many course with some of the most famous UK and Japanese instructors in the world of Shotokan Karate.
His kyu grades were taken with senior instructors of the KUGB and latterly Sensei Ohta.

Geoff was never in a hurry to take gradings, as for him training was the most satisfying aspect of karate. This was clearly demonstrated when he was awarded his Shodan at the first attempt in 2001 by Sensei Enoeda. Over the last few years Geoff has become a value club instructor, his sessions are always different and thoroughly enjoyable.

Geoff's love of the Orient does not stop at Karate. His other love is Bonsai, growing and exhibiting miniature trees.

Steve's introduction to the martial arts started as a teenager when he started judo in Bristol. He became successful in competitions over the years was runner up in the BJA nationals at the age of 15. A bad shoulder injury cut short his Judo progress and eventually had to quit training altogether.

At the age of 34 Steve Joined Norton Radstock JKA club and soon became immersed again in the martial arts.  In 2004 Steve was awarded his Shodan by Sensei Aoki and Sensei Ohta after only three and a half years training. He continued to train hard and attended many national course for the next four years and in 2008 was awarded his Nidan from Sensei Bura and Sensei Ohta.

Since gaining his Shodan, Steve has been a regular instructor at the club and often incorporates some of his Judo techniques into his classes.
All content ©Norton Radstock JKA Karate Club
Powered by